Sr Anouska is the chaplain at Goldsmiths, University of London and London South Bank University. Read more about her vocation as an apostolic religious sister.

Hi, my name is Sr Anouska Robinson-Biggin and I am an apostolic religious sister in the Society of sisters, Faithful Companions of Jesus.  I met the FCJ Sisters first of all online, through a website that has since been updated but at the time was called ‘God Knows Where’ and he did.  To read more about my vocation story visit our website.   From the moment I first met the FCJs I felt at home, like the missing piece of the jigsaw puzzle of my life was finally complete, and whilst there are always highs and lows in every vocational pathway, I have never regretted my choice.  I can honestly say I love it and, as a chaplain, long for people to find their chosen place in life so they too can thrive.   Wherever and however you are called, if the path you choose is the right one for you, it is the best thing, so go for it!

What is an Apostolic Religious Sister?

Like the women in the Gospel who followed Jesus from their own resources (Luke 8:1-3), and like the apostles, were sent out to spread the Gospel (Good News), apostolic religious sisters are women of the Church, who follow Jesus, and are sent into the world to work.  How and where we work depends on the charism of the group to which you belong.

What is the charism of the FCJ Sisters?

Our charism, the gift that our group of religious women brings to the Church, is rooted in the tradition and spirituality of St Ignatius of Loyola.  At its heart it is the gift of companionship and this informs so much of what we do and how we do it.  Inspired by the Jesuits (Society of Jesus), yet firmly fixed on Jesus, we try to be companions of Jesus and one another.  We bring this companionship to all those with whom we work in the world.  Whilst traditionally involved in education, we are not attached to one form of work and proceed always by discernment.  The works entrusted to our foundress were 1. To be a Jesuit (a companion of Jesus), therefore rooted in Jesus and in a deep personal relationship with him, sustained by daily prayer and regular times of retreat.  We are also committed 2. To work for education, particularly of girls and women, 3. Retreats and 4. Missions.  How we fulfil these changes looks different in the different countries in which we work and the needs of the time.

Yes, like our monastic counterparts, we profess vows, offering our lives to God.  As a member of the Faithful Companions of Jesus I have made the vows of religious poverty, chastity and obedience.  These are a response to God’s call to me and as a way of enabling me to better respond to the needs of the world according to our charism.  I made my first vows in 2007 and had the joy of making my final profession in 2015, the year for consecrated life. 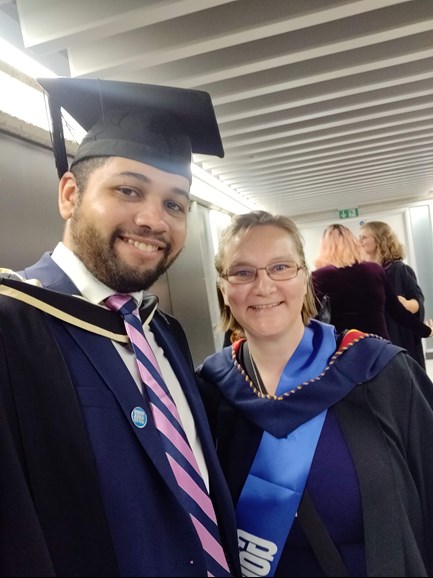 Yes, as you said earlier, I work outside my community as well as within it.  Three days a week I am the Senior Chaplain for Higher Education in the Archdiocese of Southwark.  This means I work on two university campuses in the Archdiocese, accompanying staff and students and walking with them on their journey of life.  This can involve one to one meetings, retreat days, faith formation as well as being an active member of the multi-faith chaplaincy team in both institutions.  The remainder of my time is taken up with spirituality, whether that be spiritual direction itself or facilitating retreats elsewhere.  I am also a member of the Spirituality Commission in the Diocese.  Prior to working in the Archdiocese I spent seven years as Director of Young Adult Ministries for the Jesuits in Britain.   Within the community we share responsibility for the running of the house.

We are a group of women, of all ages and stages – I have the joy of living with women who have lived the FCJ life for over 70 years as well as those who are in the early stages of initial formation as novices.  Together we live as companions, witnessing to the value of a life lived in common, structured around prayer and meals together at least once a day, depending on our ministry.  We are an international congregation, so I live with people both born in different countries as well as those born here but with a different cultural heritage to my own.  For my part I am from Yorkshire and moved to London when I made vows, having spent my novitiate in France.  The majority of my time since vows I have lived in different communities in London though I have also had the chance to study and volunteer in Toronto in Canada, working with our Companions in Mission in the FCJ Refugee Centre whilst studying at Regis College.  I then had the opportunity to share life with seven sisters and one formator in the Philippines as we spent three months preparing for final vows.  Each of these situations placed me in different community contexts yet the true essence of FCJ life, was present (women rooted in a personal relationship with Jesus Christ, consecrated to God through the vows and desiring to be sent on mission, wherever the need is greatest) even if it looked and felt different and that was a wonderful thing to discover.

How do you balance your work and life in community?

As an apostolic congregation, we come together to be sent out on mission.  St Ignatius of Loyola never intended the people who followed his rule to be bound by the set hours of the Office of the Church.  As a result, I will always try to be present in community when it is possible but as a university chaplain office hours and needs vary depending on the time of year and the needs of the staff and students.  As a result, there are times I am not in the community for our evening meal or prayer.  In discussion with the sister responsible for our community I discuss this and rely then on the prayers and companionship of my community to support me in the work I do and I give that support to others when they too need to be away for work.

Are the vows not difficult to live in?

Not everyone is called to make religious vows or “evangelical counsels”, (though of course, married people live their commitment through an exchange vows too) and I could imagine if you were not called to religious life (or marriage) they might seem incredibly difficult to live, but for me whilst they can always be areas in which I need to grow, I do not find them difficult overall.   I firmly believe that through prayer and discernment, God has brought me to the place I am most fully alive and therefore has given me the grace to live the commitment he has called me to.  Of course, there are moments when they can be challenging, but overall, I consider the vows to be liberating, freeing me to be able to love and serve more fully the people of God within and outside the Church.

Why don’t you wear a habit?

This is a question that is often asked about apostolic religious women.  ‘Are we real nuns?’  ‘Why don’t you wear the dress thing?’  The true answer is we don’t wear the ‘dress thing’ because in the Vatican document Perfectae Caritatis no.17 apostolic religious were encouraged to return to their roots and the inspiration of their founders and foundresses, dressing accordingly, depending on their location and the ministry that they are involved in.  The ‘dress’ that we were wearing up to that point was the widow’s dress of 1820 France.  Whilst we took time to transition, our constitutions today state that we should dress simply and in accordance with the culture in which we live.  We will also wear the FCJ cross that we receive on the day of our profession.  Whilst the lack of visibility can be hard for some people who prefer the outward signs of religious life to be more visible, it is more in keeping with our founding spirit and much more practical for our apostolic life.  Our foundress, Marie Madeleine back in 1820 in France, like the Jesuits, wanted to accompany God’s people where they were.  The ‘habit’ we wore was the widow’s dress of 1820, and whilst maybe making us identifiable, it would be neither practical nor suitable for living the apostolic life in the 2000s.

Does not wearing a habit help you as a chaplain?

Whilst there are certain advantages to being stereotypically visible as a person of the church in a non-religious setting, I think overall being able to be ‘among’ the people I serve, it is preferable not to wear a habit.  This enables people to meet me - the person - first rather than the dress, and from that encounter others can grow.  I also think it helps model the equal status of all vocational pathways, as people do not put me on a pedestal because I am a religious sister.  I would hope my behaviour and that of others towards me and towards other people, would be the same whether I was ‘dressed’ as a religious or not, so although there are some challenges, I would not see a religious habit helping my role as a chaplain and it could perhaps hinder it.

What would you say to anyone considering religious life as a vocation?

I would say ‘Go for it’.  If God seems to be calling you, God will also give you the grace to live this way of life.  It is equally as valuable as being married, or single, ordained or consecrated as a virgin or widow etc. but it is also a specific way of fulfilling your baptismal vocation when you were ‘claimed for Christ’.  As we are reminded in Scripture, ‘Do not be afraid’, if this is the way of life for you, step out of the boat and keep your eyes fixed on Jesus.

Service in celebration of Religious Life

Visit 'Is God Calling Me?'

The Fourth Sunday of Easter we traditionally celebrate as Good Shepherd Sunday and Vocations Sunday. This is because in the Gospel of the day (from St. John’s Gospel), Jesus speaks of himself as the Shepherd who is prepared to lay down his life for his sheep.
Continue Reading

Is God Calling Me?

Vocations Webinar: 'Here I am, send me!'

Sr Anouska is the chaplain at Goldsmiths, University of London and London South Bank University. Read more about her vocation as an apostolic religious sister.
Continue Reading