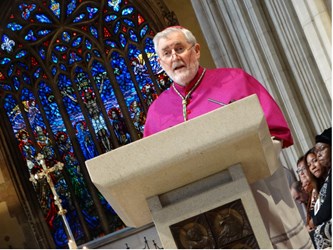 On leaving secondary school, Bishop Pat entered the novitiate of the Congregation of the Sacred Hearts of Jesus and Mary in Cootehill, Co. Cavan and made a profession of temporary vows in August 1965. He studied philosophy and theology in the United States and graduated with an M.A. in Theology from Augustinian College, Washington, D.C. in 1971. A short period of teaching followed after which he returned to Ireland to be ordained as a priest in July 1972.

Following completion of a diploma in social studies from the Richmond fellowship, Bishop Pat began work in the parish of All Souls, Peterborough where he remained for two years. He moved to the parish of Our Lady and St. Augustine, Daventry in the Diocese of Northampton. He served there for nine years, first as assistant priest and then as parish priest. It was during this time that he became involved in the 'Engaged Encounter Movement'.

In 1984, Bishop Pat was transferred to London as Director of the Congregation of the Sacred Hearts of Jesus and Mary Formation House in London. During this time he completed a masters degree in theology at Heythrop College. In 1987, he was appointed parish priest of Our Lady of Lourdes in Acton in the Archdiocese of Westminster. He also served as Vicar for Religious for the West Area of the Diocese. During this time, Bishop Pat was involved in establishing 'Emmaus House' (Acton Homeless Concern), a parish based project for homeless people.

In 1992, Bishop Pat was elected Provincial of the Irish-English province of the Congregation of the Sacred Hearts of Jesus and Mary. He completed his term as Provincial in 1998 and became parish priest of St. Thomas the Apostle, Nunhead in the Archdiocese of Southwark. During his time there, he was appointed to the Mission Commission of his Congregation in 2000. He also served as the Diocese’s Episcopal Vicar for Religious. In 2003, he was appointed as parish priest of St.Chad's South Norwood.

On 14th February 2006, Bishop Lynch was ordained titular Bishop of Castrum and Auxiliary Bishop of Southwark with responsibility for the South East Pastoral area. He retired in December 2020. 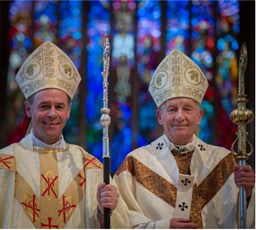 Paul Mason was born in North Shields, Tyne and Wear on 6th November, 1962. He attended, and was baptised and confirmed in, the parish of Our Lady and St. Edmunds, Backworth. He was educated in St Anselm’s Roman Catholic High School, North Shields, and Kings College, London. Following graduation he worked for Olivetti in Turin and then Hewlett-Packard in London until September 1992.

Bishop Paul entered formation for the priesthood at the Venerable English College, Rome and was ordained deacon at Palazzola, by then Bishop Cormac Murphy-O'Connor in 1997. He was ordained to the priesthood on 25th July 1998 at Our Lady and St. Edmunds, Backworth, by Archbishop Michael Bowen.

Bishop Paul’s first appointment was as assistant priest to the parish of Saint John the Baptist, Purley in 1998. In 2001, he became a full time hospital chaplain to St. Thomas’ and Guys Hospital Trust. He remained in this role until 2012 when he became Pastoral Director at Allen Hall Seminary. At the same time, he took on the role of Director of Ongoing Formation for Southwark Diocese.

In 2014, Bishop Paul left Allen Hall to take up the post of Episcopal Vicar in Kent. On 23rd April 2016, he was named as Auxiliary Bishop of Southwark by Pope Francis, with the Titular See of Skàlholt, and his Episcopal Ordination took place on Tuesday 31st May 2016 at St George's Cathedral Southwark.

On the 9th July 2018, it was announced that Pope Francis had appointed Bishop Paul as Military Ordinary for Great Britain, a position usually referred to as Bishop of the Forces. Bishop Paul took canonical possession of the Bishopric of the Forces on Wednesday 12th September 2018.

Bishop John Hine was born at Tunbridge Wells on 26 July 1938. He was educated by the Jesuits at Stonyhurst, Lancashire and the Xaverian Brothers at Mayfield College, Sussex.

In 1956, Bishop Hine began studying for the priesthood at the Venerable English College, Rome for the Archdiocese of Southwark. He was ordained priest by Cardinal William Godfrey on 28th October 1962.

Bishop Hine served as an assistant priest in Worcester Park, Maidstone and Chatham parishes. In 1978, he became the first parish priest of the new parish of Bearsted and was involved in the building of St Peter’s Church, Bearsted. He was also appointed Secretary, and then Chairman, of the Kent Schools' Commission. In 1986, Mgr Hine was appointed Vicar General and Chancellor of Southwark Archdiocese, resident at Archbishop’s House, Southwark. Bishop Hine was also a Canon of St George’s Cathedral and became a Monsignor.

On 27th February 2001, Bishop Hine was ordained as Auxiliary Bishop of Southwark and Bishop of the titular see of Beverley by Archbishop Bowen. He was given oversight of the Kent Pastoral Area of the Diocese. In 2014, at the age of 75, Bishop John submitted his resignation from office to Pope Francis; this was officially accepted on the 7th May 2016.

Having relinquished his responsibilities for the Kent Pastoral Area, Bishop John accepted an appointment as parish priest at St Andrew's, Tenterden, where he ministered until July 2020. Bishop John is now retired from formal pastoral appointments. 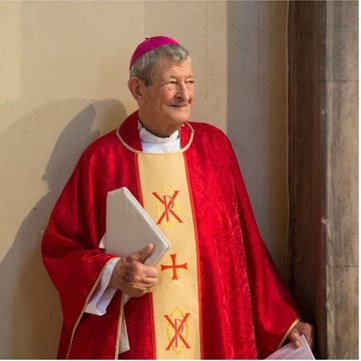 Bishop Howard was ordained priest on 31st May 1953 and served as assistant priest at Our Lady Queen of Peace, Richmond.

In June 1965, Bishop Howard took over as parish priest of Our Lady Queen of Peace, Richmond. He was formally inducted by Archbishop Cyril Cowderoy in November 1965. Aged 38, he was the youngest parish priest in Southwark Diocese.

In 1972, Bishop Howard was assigned to the Southwark Catholic Children's Society, becoming its secretary and treasurer.

On 30th January 1980, Bishop Howard was ordained Bishop of the titular see of Newport and Auxiliary Bishop of Southwark by Archbishop Michael Bowen with responsibility for the South West Pastoral Area. He served in this position until his retirement on 7th January 2004.

John Jukes was born in Eltham, south-east London, on August 7th 1923. In 1946, he entered the Order of Friars Minor Conventual. After completing postulancy and novitiate in Liverpool, he was sent to Rome where he studied philosophy at the Gregorian University and obtained his licentiate in theology at the Pontifical Faculty of St Bonaventure.

Following ordination at St. Anthony of Padua, Mossley Hill, Liverpool, in 1952, Bishop John was appointed Rector of St Bonaventure’s Seminary and novitiate in Beaumaris, Anglesey. In 1959 he was made parish priest of St Clare’s, Manchester, and the following year became Secretary and Vice-Provincial of the Province. He was sent to London in 1964 to take charge of St Patrick’s, Waterloo.

In 1969, Bishop John moved to Canterbury, initially staying with the ordinands at St Augustine’s Anglican College. He was one of the founders of the Franciscan International Study Centre, which opened in the city in 1973, and was appointed its Vice-Principal.

In 1973, Bishop John was made Vicar Episcopal for Religious in Southwark Diocese. Six years later he was elected Minister Provincial of the English Province of the Friars Minor.

On 30th January 1980, Bishop John was ordained as Auxiliary Bishop of Southwark and titular Bishop of Strathearn in St George’s Cathedral, Southwark by Archbishop Michael Bowen and given pastoral responsibility for Kent. Bishop Jukes retired in 1998. In 2002, Bishop Mario Conti of Aberdeen invited him to become parish priest of Huntley, Banff and Portsoy.

Bishop Charles was born on April 14th 1924 in Waterford. He entered St John’s Seminary, Wonersh in 1941 and was ordained in Holy Trinity Cathedral, Waterford, by Bishop Daniel Cohalan on June 6th 1948.

Bishop Charles’s first appointment was at St Stephen’s, Welling. In 1955, he moved to English Martyrs, Streatham. He was appointed Chancellor of the Diocese of Southwark in 1958, made a Papal Chamberlain in 1960 and a Prelate to the papal household in 1965. In 1965, he was appointed Vicar General of the new Diocese of Arundel and Brighton and in 1968 he became Episcopal Vicar for Religious. The following year, he was appointed parish priest of Our Lady Help of Christians, Blackheath.

On 8th December 1972, Bishop Charles was ordained as Auxiliary Bishop of Southwark and titular Bishop of Tricala at St George’s Cathedral, Southwark by Archbishop Cyril Cowderoy. After the death of Archbishop Cowderoy in October 1976, Bishop Charles was put in charge of the Diocese until the installation of Archbishop Michael Bowen in April 1977. In 1979, following the Episcopal ordinations of Bishop Howard Tripp and Bishop John Jukes, he was given responsibility for south-east London.

Bishop Brown was ordained titular Bishop of Pella and Auxiliary Bishop of Southwark on 12th May 1924. He died on 16th December 1951.

Our Pastoral Leaders from 1850 to today