I was settling down into my seat at St Pancras when Abp Justin Welby walked past me and sat a few rows in front.  At least I could relax knowing I was on the right train!  On the next train, from Nottingham to Alfreton, I met a lady from the Focolare movement, who knew a former CUC member, to chat to.  Some of those who had arrived in Swanwick by car were offering lifts from the station, and I was chauffeured by Bp Mike Royal, of the Evangelical Alliance, who I soon discovered was going to become the new CTE general secretary at the end of the Forum.  So, all in all, it felt quite a blessed journey.

This was my first visit to a CTE Forum, generally held every three years, though the last one was in 2018.  The 52 member churches were represented there, along with representatives from a number of charities and organisations considered to be ecumenical – around 300 delegates in total.

We began with the inevitable “Welcome, introductions and opening worship” when Dr Paul Goodliff, outgoing CTE general secretary reflected on the ecumenical journey since the last Forum.  After dinner Justin Welby gave his talk on the theme of “Reconciliation in a post-Covid world”.  My first thoughts were that it was looking at the world in quite a negative way, pointing out the damage we are doing to the world by knocking out numerous different species, and how he believed that there would be even greater developments in science and technology in the next 40 years than we have so far seen, some of which we may prefer not to see.  Whilst there was a reasonable presence of invited young people in the audience, he imagined most of the participants would no longer be around to witness that!   He reminded us that, apart from the war in Ukraine, 49 other wars were going on in the world.  Reconciliation is therefore important, and in John 16:13 Jesus promised the Spirit to equip us for this.  We exist to glorify Christ, and our divisions do not glorify Christ.  With all the world problems, we need to take a holistic approach.  However, he did end on a more positive note, that of hope.  A quote I liked was: “Where we disagree, we must learn to disagree well.”  He stressed that even if we don’t all believe the same thing, we should ask ourselves who we all follow.

Morning Prayer on Tuesday was led by Jordan and Wesley (Church of God of Prophecy), two brothers with a big heart for music and ministry.  Whilst I know some of the traditional Christians found their music rather too loud, I was quite moved by the obvious commitment they have to their ministry.  Singing together “What a wonderful name is Jesus” really did it for me!

After a panel discussion around questions which came out of Justin Welby’s talk, Cardinal Vincent Nichols ably rounded off the session by quoting from the Transfiguration, pointing out that the Church is for sinners and how we must keep our focus on the Lord.  He also talked about his favourite saint, Francis of Assisi.

After the coffee break, Professor Anthony Reddie (whose Caribbean parents were part of the Windrush Generation) spoke from the heart about “Reconciling communities – being good news in fractured communities and society”.  He gave us food for thought when pointing out that Pontius Pilate represented whiteness, the governments that rule other countries.  Jamaica was run by the British until 1962.  Crucifixion was the most humiliating way to die, and it showed the power of the Romans at that time.  Are we British willing to face what we did in the past, acting like Pontius Pilate to get rich by being cruel to others, as we did through times of slavery? 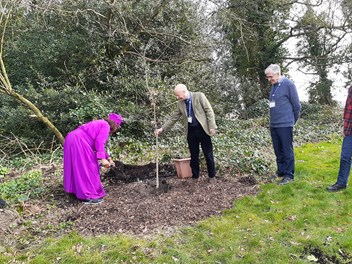 Following lunch (no meat or fish served), as part of the Forum’s environmental theme, some of us gathered to watch a tree being planted by Rev Paul Goodliff, accompanied by the youngest delegate and Abp Fidelia Onyuku-Opukiri (Council of African and Caribbean Churches UK), who has been associated with CTE since its inception.  Meanwhile the Marketplace was a chance for ecumenical organisations and charities to display their information and resources.

This was followed by a chance to attend two workshops.  I had been rather daunted by the titles on offer, but settled on “The Toolkit and A Flexible Framework” for my first one.  I expected this to look at frameworks for CT groups as well as LEPs, but sadly it didn’t, so it wasn’t very relevant to my situation.  It was interesting, though, to hear what is going on in other parts of the country, even if the RCs can’t fully participate in LEPs.  My second workshop was based on music, though again it took some people by surprise.  As I am actively involved in music in my own parish, it was good to share with others our experience of providing music, coping during the pandemic etc.

On Wednesday morning we began with a choice of six different types of morning worship.  Being sponsored by the Catholic Church, I attended Mass in the chapel, led by Bp Paul Swarbrick from Lancaster.  It was the only opportunity to gather with fellow Catholics, though I had come across some of them, mainly by chance, over the previous days.  I would have welcomed at least a short meeting of Catholics as part of the Forum, but it wasn’t part of the programme.

After breakfast, the gathered delegates affirmed a statement about Ukraine, calling on the UK government to make it easier for refugees to enter the country, particularly since so many thousands of people had offered to accommodate them.  We were then treated to what was my favourite talk of the Forum by Dr Ruth Valerio, international speaker, author and advocate for saving our planet – who practises what she preaches!  She began by telling us that getting our hands into the soil triggers happy feelings because we were created to get our hands dirty.  She spoke about biodiversity loss, and how all creatures bear the fingerprint of God.  Whilst 9/10 young people are concerned about climate change, only 1/10 churches are doing anything.  “Climate change” has become “Climate crisis” and should be so-called to make people take action.  She encouraged delegates to go home and persuade their churches to get involved in whatever way was practical.

Finally we welcomed Bp Mike Royal to his new position as CTE general secretary.  He is the first non-white man to take on the role, and I believe he is a good choice.  He seems full of energy, with 30 years in ministry for a Pentecostal Church.  He spoke of the current mental health crisis and the cost of living crisis and how it is important the churches do things together as far as possible.  We have to raise a new generation of young Christians with a voice.  He made a reference to the sadness of the empty Fourth President’s chair due to the representative chosen by the Quakers being in a same-sex marriage.  Referring to what Justin Welby said at the beginning, he said: “When we disagree, let’s disagree well.”

This is a very difficult problem for CTE to agree on currently, though I can foresee more leniency coming in time.  As it happened, I travelled back to St Pancras with none other than Abp Fidelia Onyuku-Opukiri who was very glad of a travelling companion as she has walking difficulties.  She took the chance to tell me all about the “empty chair” and how she felt somewhat responsible for it as she knew the African churches wouldn’t be happy being part of an organisation with a president in a same-sex marriage.   When I later told this story to my brother, a one-time Quaker, he was somewhat shocked to hear that the chair had to remain empty – probably typical of the reaction of the average person, and not a good example of the churches working together.

However, overall I felt the Forum had a very good feeling about it and everyone seemed to enjoy interacting and praying with each other.  As the closing reflection said: “The work is in the walk, even if we never reach unity.  We must get our hands dirty along the way……….,” which is exactly what is happening.

The Archdiocese of Southwark is blessed with many commissions carrying out a variety of work, from Education to Ecumenism and Safeguarding to Spirituality. They all play an active role in the life of our Catholic community.

Agency for Evangelisation and Catechesis

The Christian Unity Commission for the Roman Catholic Archdiocese of Southwark has been in existence for over forty years. Our main task is to encourage Catholics within the Archdiocese to work and pray for Christian unity.
Continue Reading

Do you share our vision of a world in which people live in peace and harmony with one another and with nature, where our common humanity is respected and all can contribute freely to the common good?
Continue Reading

The diocesan Liturgy Commission has a responsibility to the Archbishop for the promotion of the liturgy and other acts of public worship. Its work encompasses the buildings in which we worship, the music with which we praise God and training for those involved in the liturgy in different ways.
Continue Reading

The Southwark Marriage and Family Life (MFL) team is responsible for initiating, fostering and supporting activities in the diocese that will enable married couples more fully to live out their sacrament of matrimony by enriching their relationships.
Continue Reading

Although it has not been possible to undertake any pilgrimages until very recently, due to the COVID-19 Pandemic, it is ordinarily a regular part of Catholic life. The Christian life is a journey towards God, and in this simple act of outward physical travel, whether on foot or by aeroplane, we inwardly seek to draw closer to Christ by putting time aside to consider our relationship with the Lord, and ask where he is leading us.
Continue Reading

Welcome to Safeguarding within the Archdiocese of Southwark.
Continue Reading