The Roman Catholic Church of St Thomas of Canterbury in Kent lies within a 5-minute walk of Canterbury Cathedral, which houses a major shrine to Saint Thomas Becket.

The small but elegant gothic-style Roman Catholic parish church is home to two relics of Becket, notably a finger bone and a piece of his vestment.  In addition, the Martyrs Chapel houses a stole that once belonged to Saint Oscar Romero, whilst three major Reformation Martyrs, Saint John Fisher, Thomas More and John Stone, are duly honoured.

The church also houses a number of very fine stained-glass windows, Stations of the Cross which previously resided in Westminster Cathedral and a striking Canterbury Saints Chapel.  The church was designated as an Diocesan Shrine by Archbishop John Wilson on 16th November 2019. 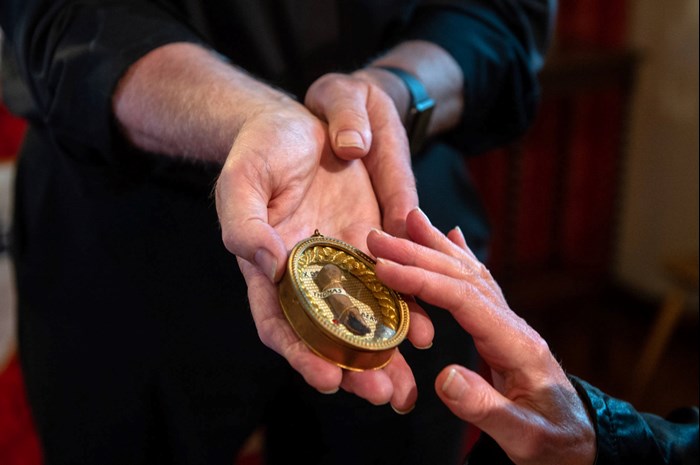 Within the gothic columns of St Thomas of Canterbury Roman Catholic Church lies a Martyrs Chapel. There are five saints who are remembered in this place, namely St Thomas Becket (also known as Thomas of Canterbury), St Oscar Romero of San Salvador, St Thomas More, St John Fisher and St John Stone, the latter three of which found themselves embroiled in King Henry VIII’s ‘Great Matter’ and the ensuing Reformation.

The chapel features a simple reliquary of bone and cloth belonging to Archbishop Thomas Becket, who was famously murdered by four of the King’s men. A certificate signed by Archbishop John Wilson denotes that this is an official Diocesan Shrine and a stunning stained-glass window tells of his sacrifice.

The stories of all the saints featured in this chapel follow a similar vein: a conviction that the love of Jesus and our calling to follow him and walk in his ways, is beyond the earthly laws of state: a certainty of the senses which meant that they each ultimately suffered the same high price as Christ.

This prayerful space, alongside the simplicity of the relics, allow us to reflect quietly, beyond the anger, egoism, disagreement and loss of earthly life, to their source of motivation and inspiration: love of the Church, and of God.

At this time, the parish is seeking funding to create an updated Shrine so that it can become an attractive liturgical space for pilgrims.  Visit the link to the Shrine Project below to find out more.

As a young man, Becket’s dedication and competence in his work led to Theobald, Archbishop of Canterbury, nominating him as a potential candidate for the position of Lord Chancellor: a post to which he was eventually appointed in January 1155. One of Becket’s tasks, as Chancellor, was to exact revenues due to the King from a variety of sources, including the Church.

Upon the death of Theobald, Becket was elected on 23 May 1162 as his successor.  Becket was ordained a priest on 2nd June 1162 and on 3rd June 1162, was consecrated as Archbishop of Canterbury by the Bishop of Winchester.  At this point, he underwent something of an unexpected transformation, leading to his resignation as Chancellor and sudden reversal in loyalty, often standing up for the rights of the Church in opposition to the wishes of the Crown. This eventually harmed the once harmonious relationship with the King, and in fact, led to significant conflict, as both church and state tried to assert control. 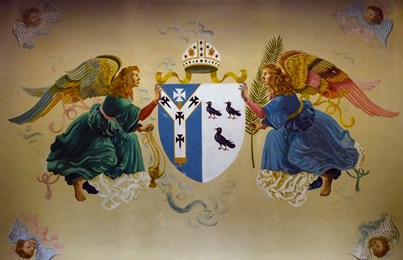 In a period of meetings, known as the Constitutions of Clarendon, King Henry II managed to convince the bishops to agree to his wishes, with the exception of Becket.  The Archbishop eventually agreed, in theory, to the content of the constitutions, but in reality, refused to sign the documents.  He was formally charged with Contempt of Royal Authority and Malfeasance and on 8th October 1164 and travelled to Northampton Castle to answer these allegations.  Becket was duly convicted but stormed out of the proceedings and immediately fled to France, where he was offered the protection of King Louis VII.

King Henry was enraged and targeted not only Becket but also his supporters, including those in Pontigny Abbey, where he was given sanctuary. Becket reacted by threatening the excommunication of both the King and bishops.  Eventually, Pope Alexander III sent papal legates in an attempt to resolve the dispute 1167.  Progress was slow, but by 1169, Henry had decided the crown his son as King. This required the assent of the Archbishop of Canterbury, since the most senior cleric in the country in the land had the right to conduct the coronation ceremony. Therefore, Henry sought to take a conciliatory stance with Becket, but the attempt failed, and at this point the King had his son crowned by the Archbishop of York.

As a result of this action, the Pope authorized Becket to lay an 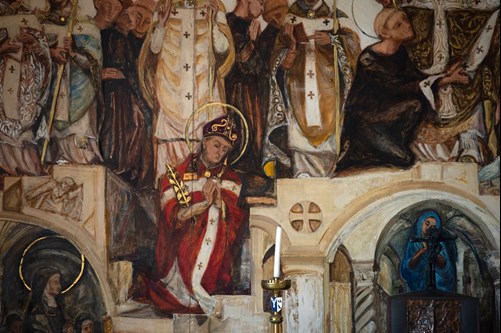 interdict on England, forcing Henry back into negotiations, and an agreement was made that would allow Becket to return to England in December 1170.

The dispute seemed resolved, but Becket excommunicated the three senior clerics who had crowned Henry’s son, leading Henry to exclaim

"What miserable drones and traitors have I nourished and promoted in my household, who let their lord be treated with such shameful contempt by a low-born clerk!"

In response, four knights, taking Henry’s words as an order, made their way to Canterbury, with the intent of confronting the Archbishop and informing him that he needed to make his way to Winchester in order to account for his actions.  The Archbishop refused to be arrested and clung onto a pillar as one knight tried to drag him outside.  Inside the sanctuary of Canterbury Cathedral, as he was making his way to Vespers, Becket suffered a violent death on 29th December, with several blows to his head. His last words were an acceptance of death in defence of the Church. This act would horrify Christian Europe and soon after the faithful began venerating Becket as a martyr. On 21 February 1173, just a year after his death, he was canonised by Pope Alexander III.  His murder damaged Henry’s reputation and in 1174 Henry visited Becket’s tomb to pay penance for his actions.

A major shrine has been erected honouring Becket in Canterbury Cathedral, where his remains also lie in a superbly embellished casket. 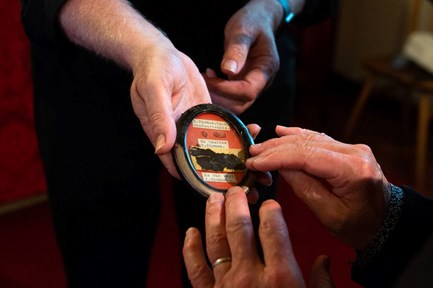 The parish of Saint Thomas of Canterbury retains the relic of a piece of finger bone, presented in 1953,  and which originated in the Cistercian monastery of Pontigny where St Thomas stayed during his years of exile.  An additional relic was obtained in the late 19th Century and consists of a further fragment of bone and by and a piece of Becket’s vestment.

Further information about the diocesan shrine

The main diocesan Shrine to St Oscar Romero is a brightly decorated reliquary cross which is located within St George’s Cathedral.  However, within the Martyrs Chapel at St Thomas of Canterbury Church sits a colourful stole worn by Archbishop Romero who, like Becket, was martyred at the hands of the state.

The stole is situated by the altar within the chapel, just as Romero was when celebrating Mass on that fateful day in 1980. The stole came to Canterbury when a relic of Becket was presented to San Salvador Cathedral, the original owner having been a parishioner in Canterbury whose ancestor was one of Becket’s assassins.  In return, San Salvador Cathedral generously presented a stole worn by Romero to Canterbury Parish and it was enshrined in the Martyrs Chapel on the Feast of the Translation of St Thomas of Canterbury on 7th July 1997.

Saints of the Reformation

The Martyrs Chapel honours three saints of the Reformation.

In 1527 King Henry VIII suddenly developed scruples about whether his marriage to Katharine of Aragon was truly binding in the eyes of God, since Katharine had previously been wed to his teenage brother, Prince Arthur, for six months before he died of a fever in Ludlow Castle.

Despite a special dispensation given by the Church to ensure the validity of his marriage to Katharine, Henry, who was without a male heir, and who had been married to Katharine for almost two decades, decided that his actions had offended God and he sought to have the marriage annulled.

In fact, Henry wanted to marry Anne Boleyn and ‘retire’ Katharine as his Queen.  Katharine however, was not kindly disposed to being put aside, and fought her case.

Amongst her supporters in the Reformation were three gentlemen: Bishop John Fisher of Rochester and Sir Thomas More, the Lord Chancellor, who both refused to sign the 1534 Act of Supremacy, which recognised Henry VIII as the Head of the Church in England, and the Act of Succession on the basis that it undermined the authority of the Pope. In addition, a humble Augustinian Friar named John Stone chose to refuse the Act of Supremacy and also to agree that he had given up his friary on a voluntary basis during the dissolution of monasteries.

All three were executed in 1535 when the denial of royal titles became a treasonable offence, with Stone suffering the ultimate agony of being hung, drawn and quartered.

Photos of the Martyrs Chapel and the parish church